If you’re looking for an impressive main course to serve for a special celebration, this easy recipe for roasted venison tenderloin may just fit the bill.

Despite the fact that venison is a less than common protein, preparing a venison tenderloin is simple and quick.

For this recipe, the tenderloins are crusted with a combination of Scandinavian-inspired spices that includes juniper berries, allspice, fennel and black pepper, pan-seared for a couple of minutes and finished to medium-rare perfection in the oven.

A light, creamy sauce, made with gjetost (Norwegian caramelized goat cheese), chicken broth, sour cream and a splash of aquavit (see below for more info) is prepared while the meat rests before carving.

About the Scandinavian ingredients

While commonly used in Scandinavian cuisine, some of the ingredients in this recipe definitely aren’t staples in the American kitchen.

If you’d like to try this dish (and we definitely think you should), here’s what you need to know.

Venison is a lean, flavorful meat that was once considered to be largely out of reach for anyone but avid hunters. Things have changed though, and quality cuts of farm-raised venison are available from specialty meat markets and online retailers.

Our go-to resource for venison is D’Artagnan, an online purveyor of sustainable and humanely raised meats, game and poultry.

D’Artagnan’s free-range venison tenderloins are imported from New Zealand and is 100% grass-fed. Available cuts include the tenderloins we’ve used in this recipe as well as steaks, chops, stew meat, shanks, ground venison, and venison sausage.

The distinctive color and flavor of gjetost is the result of slow caramelization of the milk sugars during the cheese-making process.

The most commonly found brand of gjetost here in America is Ski Queen, which is made from a combination of cow’s and goat’s milk.

In addition to adding delicious flavor to the sauce in this recipe, gjetost can be sliced and served with crackers (we like Norwegian flatbread), melted with some cream and spices to make an alternative to chocolate fondue, or baked into a yummy sour cream apple pie.

Aquavit is a Scandinavian spirit whose name translates to mean the “water of life.”

Similar to vodka, aquavit is a clear, distilled spirit. It’s flavored with caraway and various combinations of other spices and aromatics like fennel, anise, cumin, coriander, citrus peel and herbs.

Juniper berries are readily available on the spice aisle of most supermarkets, but it’s worth noting that they lose a lot of their flavor intensity over time. If possible, buy a small quantity and replace them after six months on the shelf.

Disclosure: This post contains links to products we use ourselves and can recommend with confidence. As an Amazon Associate and member of other affiliate programs, we earn from qualifying purchases made through these links.

What to serve with roasted venison tenderloin

As pictured, we like to serve this entrée with classic Scandinavian side dishes like Braised Red Cabbage, Smashed Rutabagas and Dill and Cucumber Salad.

This combination is part of our Scandinavian Style Christmas, a menu we’ve been serving during the holiday season for the last six or seven years. 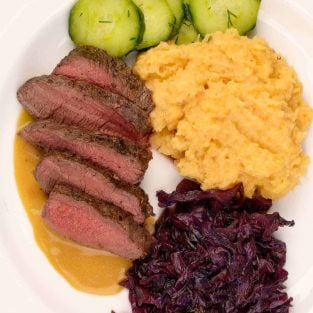 5 from 3 votes
Leave a Review »
If you're looking for an impressive main course to serve for a special celebration, this easy recipe for roasted venison tenderloin may just fit the bill.
Yield: 6 servings
Prep: 10 minutes
Cook: 25 minutes
Total: 35 minutes
Print Recipe Pin Recipe Save RecipeSAVED!

The seasonings and sauce in this dish work nicely with pork too, so if venison is not an option for you, you can successfully make it using pork tenderloins instead. Special note: This recipe is adapted from “Kitchen of Light: New Scandinavian Cooking” by Andreas Viestad.
Author: Lynne Webb
Course: Game
Cuisine: Scandinavian
Calories: 392kcal, Carbohydrates: 12g, Protein: 38g, Fat: 19g, Saturated Fat: 10g, Polyunsaturated Fat: 8g, Cholesterol: 168mg, Sodium: 592mg, Sugar: 1g
Have you made this recipe?Snap a photo and tag @gourmetconnect in your posts. We love to see what you’ve been making!