We love the creamy, caramel flavor of Norwegian gjetost cheese and found it makes a wonderful addition to apple pie. Gjetost is made from a combination of both cow and goat’s milk and has a creamy, fudge-like consistency and nutty, caramel flavor. Our filling also calls for a little sour cream, which adds a creamy balance to the gjetost. This is a very easy pie to make; our crust is a no-roll variety and our quick streusel topping is made with crunchy flake cereal. 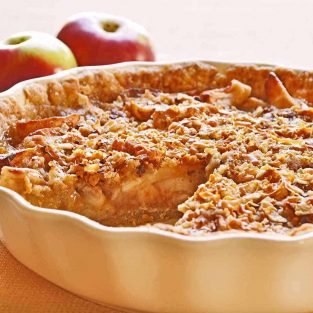 For the streusel topping:

If you don’t keep ground cardamom on hand you can replace it with pumpkin pie spice or just extra cinnamon. If you can’t find the gjetost, omit it and replace half of the sugar in the filling (1/4 cup) with light brown sugar and add an extra 1/2 tablespoon of flour.

Gjetost (pronounced “yay-toast”) develops its distinctive color and flavor because the milk sugars are caramelized during the cheese-making process. The cheese is slightly sweet and nutty and has a smooth, rich texture. We used Ski Queen gjetost, which we buy at our local Whole Foods, but we’ve had other brands in the past that we found at Scandinavian markets. Gjetost generally comes in an 8-ounce block. It’s delicious when brought to room temperature, sliced and served with Norwegian flatbread.
Author: Lynne Webb
Course: Baking & Desserts
Cuisine: European
Have you made this recipe?Snap a photo and tag @gourmetconnect in your posts. We love to see what you’ve been making!

One Comment on “Sour Cream Apple Pie with Norwegian Gjetost”