We originally wrote this entry to celebrate what would have been Julia Child’s 100th birthday on August 15th, 2012.

Julia’s contribution to the culinary education of several generations of home cooks is nothing short of extraordinary, so to honor her memory we prepared one of her recipes.

This potato galette has only two ingredients (plus salt and pepper of course), but when you follow Julia’s straightforward preparation technique, they’re transformed into a dish that is undeniably fabulous.

More on this Potato Galette Recipe

This recipe is from the book “Julia Child and More Company,” the second of two companion cookbooks to her PBS series, “Julia Child & Company.” Unfortunately, both of these books are out of print.

“A paillasson, or straw mat, is what the birds’ nest looked like to Fernand Point when he used to serve the straw potato galette at his legendary restaurant, La Pyramide, in southern France.

“According to Point’s former apprentice, chef Joe E. Hyde, in his engaging cookbook “Love, Time, and Butter” (New York: Richard W. Baron, 1971), Point’s version was cooked first on the stove, and then the frying pan was moved to the oven. But that was before the blessed advent of nonstick cooking utensils.”

This galette was part of a complete menu called UFOs in Wine. The dinner consisted of Steamed Mussels with Hot French Bread for an appetizer, Rock Cornish Hens Broil-roasted with Garlic, Cheese and Wine, Cherry Tomatoes Tossed with Butter and Herbs and Fresh Orange Blueberry Bowl for dessert.

The “UFO” in the means you can use any kind of game bird you like, not just the cornish hens. I urge you to try the whole menu if you have the opportunity.

We’ve had an oven-roasted version of this recipe on our site for for a couple of years prior to publishing this one.

It also relies on the natural starch of the potatoes to hold the galette together. You can check it out here: Oven-Roasted Potato Galette. 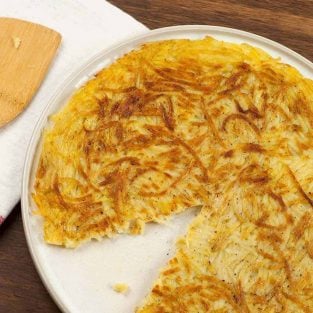 Author: Lynne Webb
Course: Side Dishes
Cuisine: French
Have you made this recipe?Snap a photo and tag @gourmetconnect in your posts. We love to see what you’ve been making!

posted in: Side Dish Recipes