This pork belly is braised in a spiced blend of aromatic vegetables and apple cider and served over cauliflower puree with caramelized onions.

Pork belly is a richly flavored cut of meat that lends itself to slow braising.

This sweet and savory recipe uses aromatic vegetables, apple cider, and spices for the braise and a cider-reduction glaze to coat the pork just before serving.

To complement the meat, we made a simple cauliflower purée, caramelized onions, and oven-roasted carrots (recipes follow). 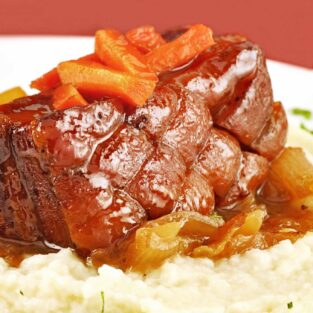 How to Make the Cauliflower Puree

Steam or roast two 1-1/2 to 2-pound heads of cauliflower until very tender when pierced with a knife (you can also use two 16-ounce bags frozen). Transfer the florets to a large bowl and add 3 tablespoons of butter and 2 tablespoons of cream. Purée with an electric hand blender until smooth and silky (you can also use a food processor or blender). Season to taste with salt and pepper.

How to Make the Roasted Carrots