Home » How To Cook: Tips and Techniques » What To Do With Watermelon

What To Do With Watermelon

Watermelons are one of the few foods that can actually be considered both a fruit and a vegetable, and as such have diverse culinary uses. More often than not, watermelons are used as a fruit because of their sweetness. But watermelons are a lot more than just sugar.

The watermelon is a vine-grown plant that originated in southern Africa, and like the pepper, tomato and pumpkin, is a fruit by botanical standards.

However, since it is planted from seeds, harvested and then cleared from the field, watermelon is also technically a vegetable.

Despite their sweet flavor and high water content (92 percent), watermelons are also very nutrient dense. In fact, watermelons offer more lycopene than fresh tomatoes, have virtually no fat, are low in sodium and contain vitamins A, B6 and C.

So, how do you choose and store watermelons? When shopping for watermelons, look for those that are firm and symmetrical without cuts, dents or bruises. Then pick it up – it should be pretty hefty because of its water content.

Lastly, look at its underside. You should spot a creamy yellow area (the ground spot) from where it sat on the ground and ripened in the sun.

When you get home, you can probably store a whole melon at room temperature for about a week. Watermelons need a more tropical climate than most fruits – 55 degrees Fahrenheit is ideal.

Cut watermelons should be wrapped up and stored in the fridge between 37 and 39 degrees Fahrenheit. Freezing your watermelon will result in a puddle of mealy, mushy flesh.

And, believe it or not, watermelons should be washed in clean running water before eating them. Even though they have rinds, the FDA recommends washing all fruits and vegetables, regardless.

There are quite a few varieties of watermelons, although we most commonly see seedless watermelons in our supermarkets.

Besides being great for cookouts, picnics and family outings, watermelons are also healthy and versatile. Our favorite dish is a sweet and savory salad that combines watermelon with feta cheese: Watermelon and Feta Salad.

END_OF_DOCUMENT_TOKEN_TO_BE_REPLACED
How To Cook: Tips and Techniques 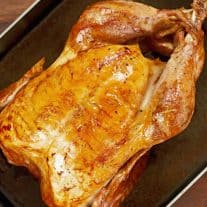 How To Cook The Perfect Roast Turkey

How To Make Gluten-Free Breadcrumbs

Welcome to MyGourmetConnection, your source for hundreds of wholesome, easy-to-follow recipes for weeknight meals, holiday dinners, and everything in between.