This warm spinach salad is delicious served with pasta, roast chicken or broiled fish. The sweetness of the roasted red peppers combined with the saltiness of the olives creates an easy “dressing” and a flavorful side dish with very little effort. 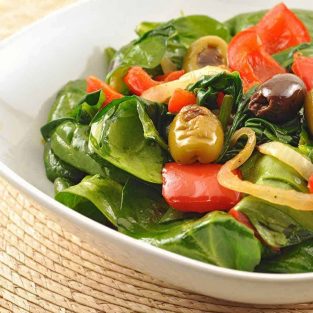 5 from 1 vote
Leave a Review »
This is a simple, flavorful salad made by roasting a combination of olives and red peppers and tossing them, straight from the oven with fresh spinach.
Yield: 4 servings
Prep: 10 minutes
Cook: 20 minutes
Total: 30 minutes
Print Recipe Pin Recipe Save RecipeSAVED!