This dish takes inspiration from a traditional Hungarian paprikas. The quick preparation and short list of ingredients are somewhat less than authentic, but certainly no less delicious. Tender cubes of pan-seared pork, sliced onions and red bell pepper are coated in a simple sour cream-paprika gravy and served over egg noodles. The flavors pair well with sides like roasted fresh green beans or buttered peas. 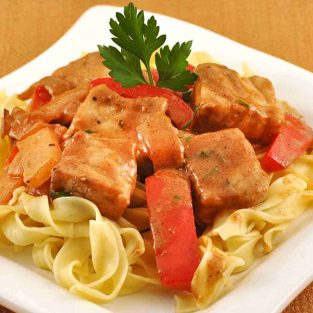 This dish is also delicious served over mashed potatoes or rice.
Author: Lynne Webb
Course: Pork
Cuisine: Hungarian
Have you made this recipe?Snap a photo and tag @gourmetconnect in your posts. We love to see what you’ve been making!